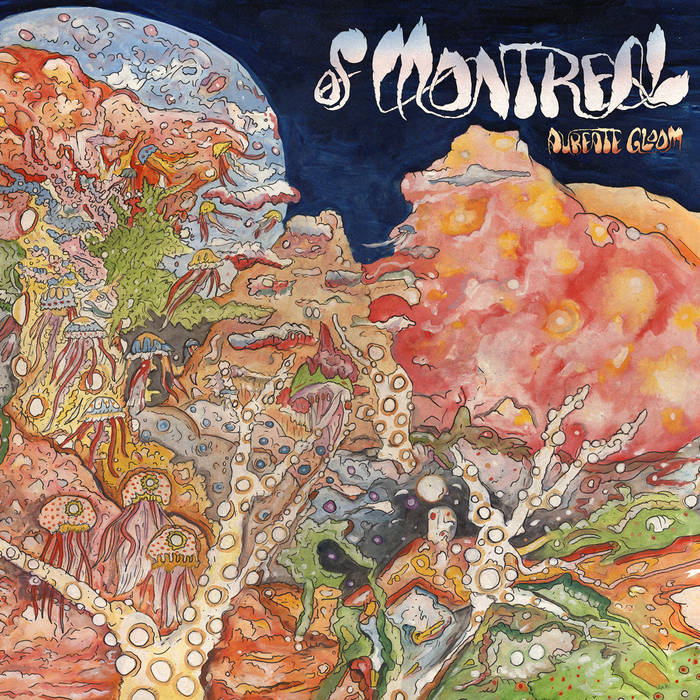 Karl Snyder An often overlooked entry in an extremely prolific band's eclectic catalog, this is one of my favorites from Of Montreal. It takes the calm of Lousy with Sylvianbriar and blends it with the more hysteric sounds of False Priest. The result is balanced and thoroughly enjoyable. Favorite track: Empyrean Abattoir.

Andrew Kobularcik Thank something for this band!!! Flipping amazing as always!!! Dustin Hoffman would be proud!!!

Graham Almond They're great. It's not as good as the last one, but very few records in Pop Music History have been. Favorite track: Estocadas.

Ben Ricketts This is my favorite recent oM record, and it is one of my favorites to revisit out of their entire catalog. Kevin's melodic genius marries his 70s art rock influences more than ever on this album. Favorite track: Virgilian Lots.

“A golden despondency” is how Kevin Barnes translates the meaning behind Aureate Gloom, the title he gave of Montreal’s thirteenth full-length album.

The oxymoron is one Barnes says best describes the overall state of his life and mental outlook while working on the record: first on a writing retreat in New York City, then while demoing tracks in Athens, before finally recording at Sonic Ranch, just across the border from Juarez, Mexico in the Texan desert.

If you’re wondering what exactly would lead Barnes to use this epithet to describe his reality at the time, look no further than the songs themselves.

While many bands rely on vague platitudes as an attempt to make their songs universally applicable, Barnes chooses to take the opposite tact — penning lyrics so personal they sound like entries ripped from a journal that should be permanently kept under lock and key.

“I was going through a very stormy period in my life and felt like I was just completely trashed,” reveals Barnes. “I might be guilty of sharing or exposing too much of my private life, but to me the best albums are those that help people connect with an artist on a deep, human level and that do so without too much artifice or evasiveness.”

For inspiration — and to put a bit of distance between himself and the events and people he writes so unequivocally about — Barnes spent two weeks in New York City this past spring.

While there, he wandered around Chelsea, Greenwich Village, SoHo, and Chinatown, imagining what it was like 40 years ago, picturing himself as Tom Verlaine or Patti Smith, or James Chance.

Lead single “Bassem Sabry” (named for the Egyptian journalist who died tragically in the spring of 2014), is perhaps of Montreal’s most political song to date, with Barnes proclaiming “Every leader is a cellophane punk,” while handclaps and danceable drums incite the listener to follow his command: “If you hear me, say ‘Yeah!’ ‘Yeah!’ ‘Yeah!’”

“Empyrean Abattoir” begins dark and brooding before unfurling into a revved up Television-inspired outro, as all the while Barnes lays bare his most gut-wrenching lyrics.

Closing track “Like Ashoka’s Inferno Of Memory” ends the record on an appropriately epic note, reveling in its seemingly effortless shifting of tempos and tones — a microcosm, really, of the overall album’s auditory audaciousness.

Having already spent many of the previous months touring together, the strength of the members’ musical rapport was instantly apparent. The group completed nearly a song a day during their stay in the desert and even wrote a brand new track on the spot, “Apollyon Of Blue Room,” whose title references a supposedly haunted bedroom in a hacienda on the studio grounds.

Working at such a breakneck pace, there was no time to nitpick, to dissect, to overanalyze. Only later, upon arriving back home, was Barnes able to take a step back and fully appreciate what he and his band had accomplished.

With Aureate Gloom, of Montreal have created one of the most unflinching, confessional and starkly emotional albums in their oeuvre.

Guests include Kassa Overall and Muriel Grossman, plus an LP of the week by Van Hunt.